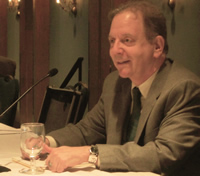 Dr. Gartner has been quoted widely in the media. A selection of print, television, cable, radio, and Internet interviews is listed below. He is available to talk to select media reporters and interviewers. For more information or to arrange an interview, call him at 212-533-0345 or email him at rgartner@richardgartner.com

Here are links to interviews with Dr. Gartner.  For a more complete list of the media outlets where he has been interviewed or quoted, see below.

The Overlooked and Pervasive Sexual Abuse of Boys and Young Men on NPR’s “The Takeaway,” interviewed by Tanzina Vega. Feb 24, 2021.

Filmmaker accuses Kevin Spacey of groping him at a bar in 2003. Television interview on ABCNews Nightline

Listen to Understanding and Treating Sexually Betrayed Boys and Men  Interviewed by Dr. Suzanne Phillips on Psych Up Live, VoiceAmerica

The Overlooked and Pervasive Sexual Abuse of Boys and Young Men. Roundtable discussion on NPR’s “The Takeaway,” hosted by Tanzina Vega. Feb 24, 2021.

Sexual Assault Against Boys Is a Crisis. It’s far more common than we think. Here’s why we don’t talk about it. Article by Emma Brown in Washington Post Magazine. February 22, 2021.

The Lost Boys of #MeToo.  Article by Soraya Roberts in Longreads. February, 2019.

Finding a Voice for Pain: Ex-detective shares his story of sexual abuse in order to help others. Article by Shelia Poole in Atlanta Journal-Constitution. Jan 22, 2019.

How Do Male Survivors Fit into #MeToo? Despite CDC numbers stating otherwise, it remains a common belief that women cannot rape men. Article by Adam Kovac in Playboy. June 21, 2018.

Why it took five accusers to bring down Ed Murray. Article by Lilly Fowler on Crosscut.com.  September 14, 2017

Chairman of Poly Prep’s board of trustees Scott Smith and brother, Philip Smith, on the opposite sides of sex abuse case. Interviewed by Michael O’Keeffe, New York Daily News, Aug 5, 2012.

Once Bitten. Interviewed for this article on the blog Toy Soldiers: For the forgotten men and boys who suffer in silence. October 12, 2012.

The Penn State NCAA Penalties: What About The Boys? Reprinted in blog by Todd Essig, PhD, Forbes.com, July 23 2012.

How Should We Talk to Boys About Sexual Abuse? Motherlode-Adventures in NY Times Parenting Blog by KJ Dell’Antonia. June 12 2012

Why Sexual Violence Should be a Household Word. quoted in PolicyMic.com article by Sarah Dropek, June 2012.

Protect Our Children: Unlocking the Mind, Interview in WABC documentary aired May 19, 2012

MaleSurvivor Calls on the Boy Scouts of America to Publicly Acknowledge the Mistakes of Its Past and Commit to Establishing Clear Standards for Reporting Sexual Assault, MaleSurvivor Public Statement, Feb 27 2012

Caring For Survivors of Boyhood Sexual Abuse Is The Next Step In The Penn State Case. Article on Forbes.com, Nov 18, 2011.

An Open Letter to Mike McQueary: On the plight of the whistleblower. Grantland.com story by Jane Leavy. Nov 2011

Myth busters: Breaking through the shame of male sexual victimization, article in CrossCurrents: The Journal of Addiction and Mental Health, Autumn 2010.

Love Among the Ruins, O! The Oprah Magazine article, October, 2008.

“A Conversation With Richard Gartner, Beyond Betrayal: Men Cope With Being the Victims“, The New York Times, March 1, 2005, by Claudia Dreifus.